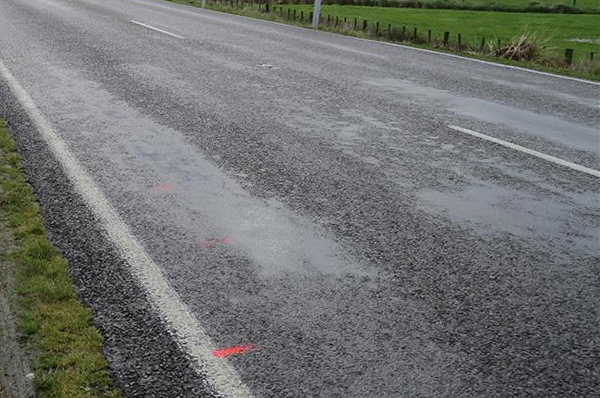 Water damage plays a major role in 'flushing', the slick bitumen-rich patches often seen on the road surface. Water can disbond the bitumen from the stone surface, which under the action of traffic migrates upwards. Photo: WSP Research.

Aotearoa New Zealand’s road network is highly susceptible to water damage with more than 90% of our roads constructed from chip seal construction. As much one third of the NZ$1.3 billion spent annually on road maintenance is directly or indirectly related to water damage.

WSP Research and Innovation Centre is finalising construction of its latest field trial of a non-permeable membrane that prevents water from entering the base course at its upper surface and uses methods to modify the sealing chip surface to prevent water disbonding of bitumen that leads to flushing. The trial is the result of a five-year research project funded by MBIE and collaborators.

“The lab trials have been successful and as we move to road trials a considerable cost saving could be made for the nation. The technology will extend the life of roads and reduce annual maintenance and construction costs for what is considered as one of the country’s biggest assets,” says WSP materials scientist Dr Jeremy Wu.

Following a successful field trial, Dr Wu says the actual savings to the taxpayer on road maintenance could conservatively be about $80 million dollars a year within 10 years as the technology is rolled out over the road network.

“Everything we do at WSP Research is focused on creating durable and less costly infrastructure for future generations,” says National Manager WSP Research, Wendy Turvey.

Find out more about WSP Research.