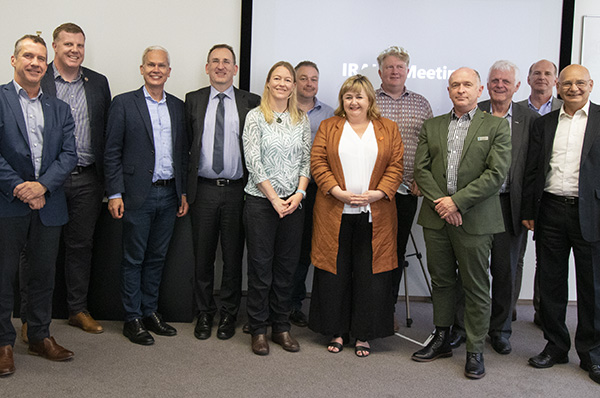 IRANZ members from around Aotearoa New Zealand gathered in Wellington on 8 December to discuss the Government’s recently released Future Pathways Green Paper. The day finished with a discussion with the Hon. Dr Megan Woods, Minister for Science, on the future of this country's science system. Photo: Louise Thomas.

After IRANZ’s regular meeting in Wellington on 8 December, 11 members met with the Minister of Research, Science and Innovation, the Hon. Dr Megan Woods in the Beehive to discuss Te Ara Paerangi Future Pathways Green Paper. Other IRANZ members joined the meeting via Zoom.

Dr Woods recognised IROs as a key part of New Zealand’s science ecosystem, with their strong links to industry and other users. She reiterated that the Future Pathways paper is about genuine consultation on how to restructure the public science system to address issues of fragmentation, unproductive competition, and inability to adapt to changing national needs. She said that the system suited the 1990s when it was created, but now is no longer reflective of the needs of the 'Team of Five Million'.

When a criticism that some Endeavour Funding decisions failed to align with stated priorities, with bids that are rejected versus those that are accepted, the Minister said "don't get caught in the weeds of the present system", she wanted instead that IRANZ members reimagine how the system could work, with funding aligned to priorities such as adaptation to climate change and core funding for infrastructure.

Questioned how the system would be kept attractive to overseas talent and how New Zealand could remain part of a global science system, the Minister said she would like to see that happen, but thought that the science system should be telling her how that should happen.

In response to a statement on IRANZ members "living and breathing" practical research of use to businesses and other users of knowledge, the Minister said it was an area of connectivity that public research institutes could stand to improve on, with the channels of knowledge exchange and transfer between public research institutions, businesses, and others needing to work better.

The Minister lamented the poor representation of Māori and Pacifika in STEMM careers. While she acknowledged that this in part came from pathways laid out in early childhood, both at home and in the education system, she felt there was much the science system could look at to incorporate mātauranga Māori and foster Māori and Pacifika researchers.

IRANZ Chair Dr John McDermott thanked Minister Woods for meeting with the Independent Research Organisations. He assured her that IROs are supportive of the aims of Te Ara Paerangi and were keen to provide input into the discussion which would help Government achieve an efficient and resilient science system that helped government achieve national priorities while at the same time recognising mātauranga Māori, providing rewarding careers, and supporting resilient institutions and science infrastructure.