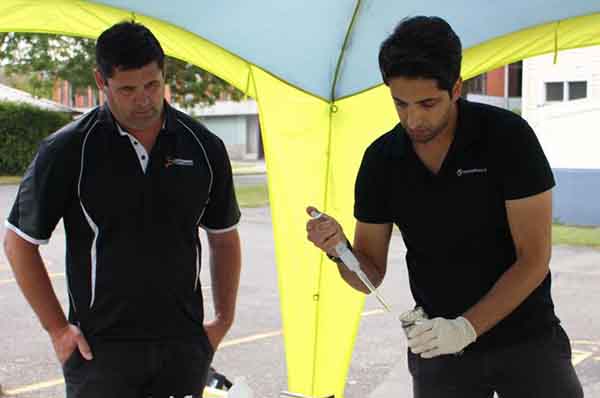 Testing for nitrates at the pop-up water testing station on the Lincoln University Campus. Image: HydroMetrics.

In February, HydroMetrics, a division of Lincoln Agritech, set up a water testing station on the Lincoln University campus. For a gold coin donation for the Farmstrong charity, anyone could bring in a rural drinking water sample in a clean jar or container and HydroMetric’s staff would test it for nitrates.

For this first trial, people brought in 59 water samples from local drinking water wells. Of those samples, 44 people agreed to allow HydroMetrics to share the results anonymously so others in the region could understand the potential issues.

HydroMetrics recorded two samples that exceeded the World Health Organisation (WHO) Maximum Allowable Value (MAV) of 11.3 mg/L Nitrate Nitrogen (NO3-N), but they were troubled to find that there were a large number of wells recording more than 50% of MAV.

The New Zealand Government has adopted the WHO recommendations for MAV.

Nitrate contamination of groundwater, and drinking water, is increasingly becoming an issue worldwide due to the overuse of fertilisers and subsequent leaching. This issue is prevalent in areas of agricultural intensification.

Subsequent field days over March have seen hundreds of rural people bringing in water samples for analysis as awareness grows of the potential problem in Canterbury.

Find out more about HydroMetrics.