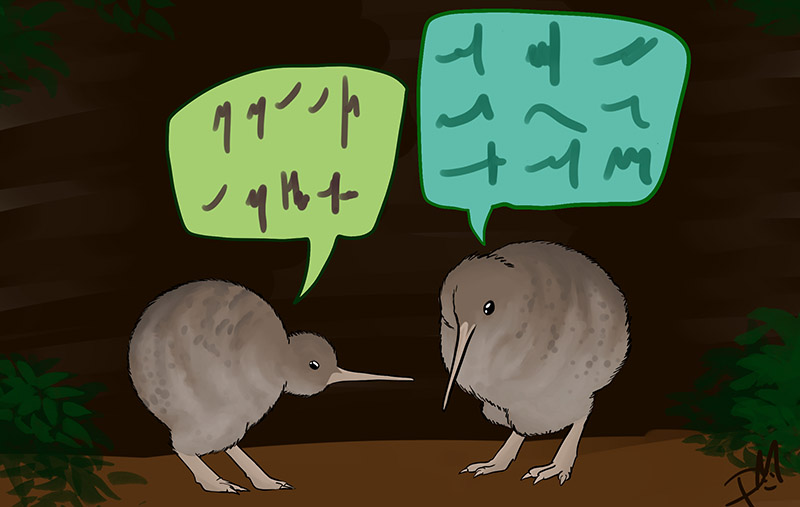 A study examining the voices of kiwi in the Paparoa Range hopes to identify unique voices of individual birds and shed new light on their territorial roaming and other interactions. Image: Caitlin Thomas-Riley.

In mid-July, Verum Group’s Behavioural Ecologist Dr Laura Molles returned to the Paparoa Range bush to collect the kiwi call recordings from the audio recorders the Verum Group team set-up in June. Verum now have two weeks of recordings, with over 2000 hours to analyse.

Laura has counted 650 calls of female and male kiwi recorded across 10 of the 11 sites. The next step is measuring the detailed characteristics of all the songs to distinguish the different individuals. This will give the researchers an idea of how many kiwi are out there.

However, she says they will need to wait until the nesting season starts, around September, to know exactly who is who. "Combined with the data from the transmitters carried by some of the kiwi, we will be able to find nests and match the calls with the individuals in each nest."

Laura says the study will hopefully allow them to monitor the Great Spotted Kiwi population in a non-invasive way, avoiding the need to capture the birds. "We hope that individual recognition will allow non-invasive monitoring, but we first need to understand how robust and practical the vocal ID method is. That’s what we’re doing now by studying a group of birds already fitted with transmitters for management purposes."

Being able to follow individuals based on their voice ID will give the researchers a better understanding of social interactions between individual kiwi. "Birds have a range of communication needs, but most of it is centred around either finding a mate or telling off a neighbour."

In June, Laura was assisted by Ray Beckford, Atarau Sanctuary Manager, to set up a network of 10 AudioMoths recorders, which were also paired with commonly-used DOC audio recorders to assess their effectiveness. The AudioMoths are small, open-source recorders used to record wildlife sounds. Placed on ridgelines with 1km diameter recording areas, the devices recorded between 45 minutes after sunset and before sunrise when kiwi are most likely to be calling.

Laura says that they should have recordings from already identified individuals to build a database for a machine learning process. The software will then be trained to recognise existing birds calls and identify new ones. Several recordings of the same bird captured by different recorders will shed light on a bird's use of its territory.

Find out more about the Individual Recognition & Monitoring of Great Spotted Kiwi project.

Laura was recently interviewed by CNN on bird dialects, Birds aren't all singing the same song. They have dialects, too.