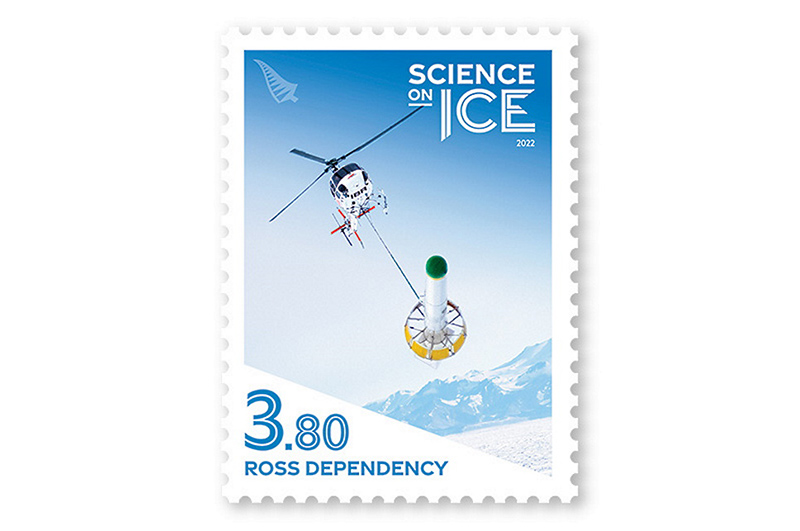 Science on a stamp: Lincoln Agritech’s Dr Adrian Tan developed the snow radar, and was in the back of the helicopter controlling the EM-bird when the photo the stamp is based on was taken. Image: NZ Post.

Motu has a seminar coming up on 13 December – online and in person.

This seminar looks at how we can use new types of data to understand the structure of research organisations – which are major drivers of innovation and economic growth. Study of the new data show the common measures of scientific productivity (like publications and patents) may incorrectly measure the productivity of marginalised groups. One example is how Crick and Watson failed to credit Rosalind Franklin with her contribution to understanding DNA. The resulting skewed signals are likely to adversely affect the quality of research investment decisions.

Women are less likely to be credited with authorship on scientific publications than men, suggests an analysis of US data published in Nature, which our seminar's speaker Julia Lane co-authored. This research received widespread international attention. This gender gap is found across almost all scientific fields and career stages. The findings may help to explain well-documented disparities in the apparent contributions of men and women in science. A complementary survey suggests this bias in science does not just apply to just women, but also non-native English speakers, first generation researchers and immigrants. The seminar will also discuss possible policies to help attract and retain scientists from diverse populations and help improve the quality of science.

Julia Lane will deliver the main presentation, then there will be a panel discussion and an opportunity for audience Q & A.

When: Tuesday 13 December 2022, 10am - 12pm
Where: Seminar room, The Treasury, 1 The Terrace, Wellington and by videoconference on Teams
Presenter: Julia Lane, Professor at the NYU Wagner Graduate School of Public Service.
Panellists:

This is a joint seminar hosted by The Treasury and Motu Research.

Malaghan: Professor Mike Berridge - A journey through the frontiers of the biological sciences

What does decades of cutting-edge research look like? Arguably, Professor Mike Berridge is a prime example, having spent his career spanning some of the most important scientific advancements of our time.

Acknowledging this lifetime of excellence in research, Prof Berridge has received several notable accolades, including the prestigious Shorland Medal in late 2021, awarded by the New Zealand Association of Scientists in recognition of major and continued contribution to basic or applied research that has added significantly to scientific understanding or resulted in significant benefits to society. In December, he will receive a Doctor of Science from Te Herenga Waka Victoria University of Wellington.

Lincoln Agritech: Science on a stamp

It’s not every scientist who gets to see their work featured on a stamp, but that’s just happened to Lincoln Agritech’s Dr Adrian Tan.

Adrian’s work – as part of a team led by Assoc Prof Wolfgang Rack of the University of Canterbury – features on one of the stamps in the 2022 Ross Dependency Science on Ice set to be released by NZ Post in November.

Bragato welcomes Dr Jacquie Harper as the new General Manager - Research & Innovation. Jacquie is currently Science Director and Chief Scientist at Overseer, and has previously held science leadership roles with BRANZ, Weltec and Whitireia, and Malaghan Institute. She is also the Deputy Chair of the National Animal Ethics Advisory Committee at MPI and is a contract lecturer at Victoria University of Wellington. Jacquie says she is excited by Bragato’s stage of development and looks forward to bringing her wealth of experience to deliver research outcomes for the New Zealand wine industry.

Bragato Research Institute is also delighted to welcome Dr Carmo Vasconcelos, Paul Epee and Chris Ireland, building capability in their extension team. The extension team’s role is to communicate research findings to the industry, ensuring information and tools delivered by research programmes can be adopted and applied by members to make better-informed decisions for their businesses. As well as transferring New Zealand research, the team translate knowledge from elsewhere to meet New Zealand conditions.

Dragonfly director and fisheries scientist Dr Philipp Neubauer was one of a handful of New Zealand pāua industry representatives, scientists and fisheries managers who met with their Australian counterparts at an abalone workshop in Hobart recently.

“It feels like the New Zealand fishery has recently turned a corner. The catch had been going down for a long time but has steadily stabilised. Last year we were happy to report the first year of increasing catches. That’s good news.”

Phil says the turnaround is quite significant in the context of the Australian fisheries, many of which are still in decline. “Some are doing OK and there are some signs of rebuilding but several areas are of concern to managers in Australia.”

From the many worthy entries, the pair selected a project for the award HERA was sponsoring. With a project titled: “Development and Industrial Testing of a Smart, Robust, Mechatronic System to Optimise the Production of Pipes,” the chosen winners were Aniqah Jamaluddin and Carl Miguel Ponio, supervised by Jan Polzer.

Holger and Reza reported that the pair demonstrated ingenuity and perseverance in their project and have provided a novel solution to improve the productivity of a welding process.

Among other philanthropic activities, for some years Verum Group has been the proud sponsor of the Atarau Sanctuary in Christchurch. Atarau is a predator-free sanctuary for Paparoa Wildlife Trust’s roroa / great spotted kiwi chicks. While they are in our care, Verum Group researchers observe and listen to them through passive bioacoustic monitoring. Verum Group's work in bioacoutic monitoring of wildlife is gaining attention around the world.

Cawthron: Fostering a pipeline of future scientists and scientific leaders

Each summer Cawthron offers 10-week scholarships to undergraduate students, providing them with an opportunity to contribute to an active scientific research project, and be mentored by Cawthron scientists.

All scholars are high academic achievers, have contributed to community activities, and are strong advocates for the environment and science-led research.

BRANZ has recently released the National Construction Pipeline Report 2022: A Forecast of Building and Construction Activity, commissioned by the Ministry of Business, Innovation and Employment (MBIE) and jointly prepared by BRANZ and Pacifecon (NZ) Ltd.

The summit is an annual multi-disciplinary summit hosted by the National Research Foundation of Singapore. Ting was nominated by Lincoln Agritech and the Ministry of Business, Innovation and Employment, and then selected as a participant by the hosts.

The theme for the four-day summit is “Advancing Science, Creating Technologies for a Better World”.

Ting says she is delighted to be attending the summit, whose speakers will include Nobel Prize recipients, as well as recipients of the Fields Medal, Millennium Technology Prize, and the Turing Award.

HERA: Awarding the power of communication

HERA were recently one of six finalists, from 2000 global entries, in the ‘not for profit’ global SABRE Awards category for their communication efforts around sustainability, innovation, and diversity for the steel industry.

It's a long par 4, a straight shot with a few tree obstacles to a green with a few subtle turns. Named "Mountain View", it's a hole that suits the nature of Verum Group, so it was a no-brainer to offer our sponsorship for the hole at the stunning Tai Tapu Golf Course near Christchurch on the Akaroa Highway - a course voted the most favourite 9 hole course in New Zealand in a survey conducted by New Zealand Golf.

Daniel March has recently joined the Verum Group team as a Laboratory Technician for Verum Group’s fuels division. He graduated from the University of Canterbury in 2019 with a BSc in Chemistry, focussing on physical chemistry and analytical methods. After graduating, he spent two years working as a sales representative for a chemical distributor before joining Verum Group. Outside of work, Daniel enjoys playing classical and bass guitar, board gaming, spending time with friends and family, and church activities.

Researchers, partners and end-users from Aotearoa New Zealand and abroad came together in November at Patuharakeke Iwi’s Takahiwai Marae for a two day wānanga to celebrate research achievements and future directions for the MBIE-funded national Marine Biosecurity Toolbox research programme.

In its third of five years, the collaborative research programme aims to develop science-based tools and technologies that empower governments, tangata whenua, industry, and the public to effectively mitigate biosecurity risks.

The state-of-the-art Physical Containment Level 2 or PC2 facility was opened in mid-2022 and is one of only a few laboratories in Aotearoa New Zealand that is equipped to safely handle and research fish and shellfish diseases caused by aquatic bacteria, viruses, and parasites.

The Malaghan Institute recently welcomed Professor Patrizia Stoitzner from the Medical University of Innsbruck in Austria as part of our visiting speaker programme. The programme, which invites world-leading experts to the Institute to present on their research in immunology and biomedical science, is an opportunity for Malaghan researchers and speakers to share skills and expertise – the backbone of cutting-edge science and collaboration.