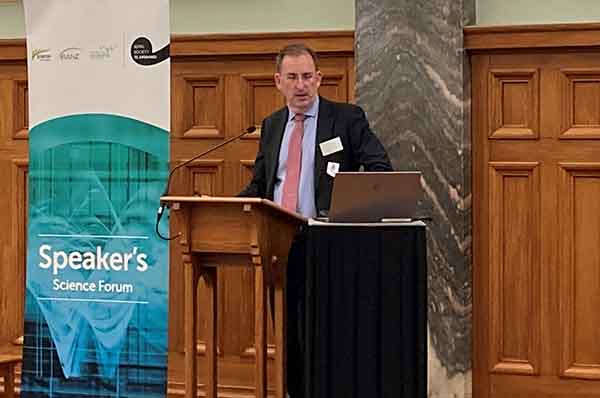 Motu’s Dr John McDermott on Covid and the Economy at the Speaker’s Science Forum at Parliament. Image: Emma Williams, Motu.

March saw the first Speaker’s Science Forum at Parliament for 2021. The theme for the event was Covid Recovery in Aotearoa New Zealand, which saw two presenters speaking to Members of Parliament.

Associate Professor Helen Petousis-Harris from the University of Auckland spoke on COVID-19 vaccines and what we might expect to see as these are rolled out; and Dr John McDermott from Motu Economic and Public Policy Research spoke on the economic effects of the pandemic, including comparisons with the 1918 flu pandemic.

John spoke about the big issues economists identified at the start of the pandemic and how modelling and forecasting have been used to date. He also talked about forecasting our recovery using Apple and Google data to measure mobility.

“Economic history provides some crucial lessons. First, early and aggressive intervention improves economic recoveries; trying to stay open to protect one's economy results in more deaths and worse economic outcomes. Second, while economies can bounce back quickly, pandemics do cast long shadows. Interest rates are likely to be two percentage points lower than they would otherwise have been for 20 years,” says John.

Charles Eason elected as a Fellow of the RSNZ

In March this year, Professor Charles Eason was elected as a Fellow of the Royal Society of New Zealand Te Apārangi. Charles recently stepped down from his role as Chief Executive of the Cawthron Institute, a role he held from 2012, and is now R&D advisor at Wakatū Incorporation and a board member of the Bragato Research Institute. His fierce passion for science innovation and excellence saw him build Cawthron into one of New Zealand’s exemplar science organisations that has led global science breakthroughs. Cawthron grew to nearly 300 people under his leadership and helped its science and technology leaders to grow in confidence such that Cawthron now plays an increasingly important role in New Zealand’s Research Science and Innovation ecosystem.

Charles’s science background includes senior research and management positions overseas and in New Zealand, including with multinational companies, a Crown research institute, a university, and a manufacturing business.

As a Lincoln University professor, he is the Director of the Centre for Wildlife Management and Conservation, and associated with research aimed at better protecting endangered native species.

In 2019, he was appointed as a Companion of the New Zealand Order of Merit (CNZM) for his services to science and wildlife conservation. Previously he was also a Companion of the Royal Society Te Apārangi and was awarded their Thomson Medal in 2017 for outstanding leadership in his research career and for his achievements as head of the Cawthron Institute. At the time, the medal selection committee said Charles’s ability to link scientific innovation with commercial experience had a global impact in the areas of chemical toxicity, pest control, food safety, aquaculture, drug development, and environmental protection. As a leader at Cawthron, they noted his skill in developing and consolidating staff capabilities, infrastructure, and financial viability.

He has made an outstanding commitment to delivering science that has real-world impact in terms of supporting the sustainable development of New Zealand’s primary industries, as well as helping to protect and restore our natural environment.

Massey University student Annaleise Faint undertook a Pūhoro STEM summer internship at the Bragato Research Institute (BRI) in Marlborough. Annaleise is now in her second year at Massey University, majoring in Molecular Biology and Biochemistry. Currently her goal is to become a secondary school teacher in a Māori Medium school teaching Biology and Chemistry. As part of her engagement with Pūhoro, Annaleise has already been developing NCEA resources for Levels 1-3 science subjects that are Mātauranga Māori inspired.

During Annaleise’s internship at BRI she learned how the organisation operates in its new research winery in Blenheim, she also travelled to take part in research at laboratories in Christchurch.

Tieghan contributed to an MBIE-funded research programme that is developing nitrogen-fixing pine trees and grasses. She worked in two locations, Christchurch and Minginui (the Bay of Plenty).

Richard Weld, Jo Steyaert, Rebekah Fuller, and Chaz Doherty from Lincoln Agritech attended the Pō whakanui for the Pūhoro STEM academy on 5 February. The Pō whakanui was a celebration of the achievements and completion of internships undertaken by Pūhoro rangatahi over summer. The event showcased 27 academic posters created by the interns. Tieghan Anderson had the opportunity to present and be questioned on her research poster - part of the requirements of her internship. For her hard work, Tieghan won a highly recommended award and received a certificate and a taonga made from pounamu.

Matt Mayernick recently joined BRI as Research Winery Cellar Manager. After gaining a BSc in Physics (with a focus in Biophysics) from the University of Colorado, Matt started his career as a research assistant for the Institute for Arctic and Alpine Research before moving on to become a Mechanical & Process Engineering Specialist at Seagate Technology, both located in Colorado. Matt and his New Zealand wife Tracey moved to Christchurch where he returned to university, achieving a post-grad degree in Viticulture and Oenology from Lincoln University.

This year, the Cawthron Institute celebrates 100 years of delivering world-class science and innovation.

Officially established in 1921 by the last will and testament of Nelson philanthropist Thomas Cawthron, Cawthron Institute is now New Zealand’s largest independent science organisation with 300 staff from 35 countries, working across multiple sites in Nelson.

Cawthron Institute Trust Board Chair John Palmer says that since its establishment, Cawthron has firmly focused on research that contributes to the economic growth of New Zealand and the preservation of our special environment.

“For the past 100 years our scientists have been able to identify emerging areas of research to assist industry, and New Zealand, to become sustainable and successful. We see ourselves as a bridge between science and industry, connecting R&D to commercial application,” says John.

Last year, HERA underwent an independent review of its carbon footprint - the first step in the journey toward carbon neutrality. The review helped them determine any offset requirements so that their business could go carbon neutral; identify the activities that are contributing most and where they should focus efforts to reduce their footprint; and start tracking their performance and improvements made.

NZ Leather & Shoe Research Association’s Rafea Naffa has been named a recipient from this year’s Earle Creativity and Development Trust. The award was given for a series of school holiday chemistry shows Rafea performed at Te Manawa Museum of Art, Science and Heritage. Rafea’s show, sponsored by LASRA, had plenty of “cool pops, fizzes and bangs” for the young audience.