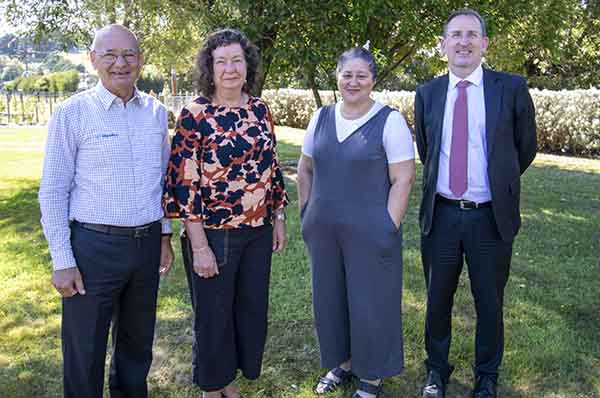 At a special meeting of IRANZ members on 17 March, Dr John Bright, CEO of Aqualinc, officially handed over the reins as Chair to Dr John McDermott, CEO of Motu Economic and Public Policy Research.

IRANZ continues to grow in size as New Zealand’s independent research sector continues to expand. With practical, real-world applications of their science, Independent Research Organisations (IROs) are key to New Zealand increasing business expenditure on research and development, and are a crucial pillar in a high-performing science system.

To that end, IRANZ welcomed four new members to the fold at the March meeting.

Melanie says they were established in 2015 through funding from the Ministry of Business Innovation and Employment (MBIE) and were born out of a sense of frustration that Māori researchers working in environmental research felt with CRIs and universities.

Research Director Dr Michael MacAskill introduced the New Zealand Brain Research Institute. The institute, based in Christchurch, is working on finding the answers to the complex questions surrounding conditions affecting the brain. They work collaboratively with the Universities of Canterbury and Otago, the Canterbury District Health Board and others, to run high quality research and offer research opportunities to both emerging and established researchers from all over the world. Mike is currently involved in projects using structural and functional MR brain imaging to investigate Parkinson’s and Alzheimer’s diseases. He says one of the problems they are currently facing with COVID-19 border restrictions is not being able to recruit overseas researchers and also not being able to find PhD candidates within New Zealand.

Find out more about the New Zealand Brain Research Institute.

Chief Operating Officer Leigh Potter introduced Mātai Medical Research. Mātai is a not-for-profit research centre based in Gisborne-Tairāwhiti. Leigh says they are still very new and are still focussed on getting set-up, but the organisation will be enhancing the capabilities of medical imaging using new and advanced software, post-processing and artificial intelligence. Their research is supporting kaupapa Māori and their regional community on a journey toward a better understanding of a healthy brain, heart, and body.

In the near future, the primary areas of research interest will be mild Traumatic Brain Injury (mTBI) and cardiovascular disease, alongside projects that impact the well-being of Tairāwhiti’s community.

Lead Researcher Professor Paul Tapsell introduced the Takarangi Research Group. Takarangi focuses on social science research with an aim to support local indigenous communities (tribal marae) and their re-engagement with ancestral resources to improve Māori well being nationwide. He said that at present there are communities in New Zealand flying under the radar in terms of extreme poverty and gave an example of a settlement near Katikati, in an area with prosperous kiwifruit and avocado ventures, where 40, generally poor quality, homes have no electricity. Paul says they intend to shine a light on these types of issues and work to provide solutions.

Takarangi has been set up under the Te Potiki National Trust. Te Potiki is a not-for-profit trust that has the marae of Aotearoa/New Zealand as its beneficiaries and will always respond to the wishes of individual marae. Te Potiki was established in 2007. They are connected to Māori Maps, which helps to connect Māori descendants with their marae, linking Māori youth with their ancestral identity.

Members were joined for lunch and a tour of the BRANZ Campus by Professor Dame Cindy Kiro, the new Chief Executive of the Royal Society Te Apārangi, Professor Wendy Larner, the President of the Royal Society Te Apārangi, and Dr Geoffroy Lamarche, the Chief Science Advisor of the Parliamentary Commissioner for the Environment. The tour of the BRANZ campus included their building materials testing, structural testing, weathertightness testing, and fire and safety testing facilities, including the BRANZ Fire Test rig for high-rise building claddings prompted by the Grenfell Tower Tragedy in London in 2017.