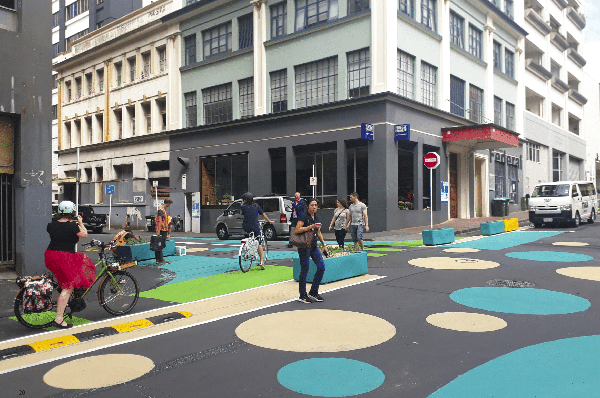 Hamish Mackie from Mackie Research says that when people think of great street design it is never about traffic-clogged streets or even good parking, but about quality urban places which are safe and attractive for walking, cycling, and spending time and money. This means greenery or water, lighting, walkways, cycleways, art, cafes, and slow traffic. Spaces for people.

Mackie Research has been working with the NZ Transport Agency on a project called Innovating Streets for People, a project that aims to make street innovation projects around New Zealand easier to implement. The Government Policy Statement on Land Transport has signalled a shift in direction towards transport that is safer, more environmentally friendly, and gives communities better access to opportunities. As part of this, quality urban places are needed.

“Competitive cities around the world now know that traffic-clogged streets are not attractive, and result in poor health and environmental outcomes. People want much more when it comes to working and living in cities. Temporary projects to re-allocate road space and test new ideas are becoming more common, but they are still hard to implement in our rather rigid transport planning system,” says Hamish.

Whole-scale upgrades to create great places to live, work, and play can have long timeframes and are expensive. Sometimes councils may want to test a change to a street, or make iterative improvements, before committing to a major investment.

The NZTA writes that they want to support towns and cities to be able to make tactical changes more quickly and cost effectively, using innovative and effective techniques to reduce vehicle speeds and create more space for people. “This technique of employing fast tactical changes is proven in other countries and has the potential to deliver significant safety benefits in a short time frame.”

The Innovating Streets for People project examines the ‘how-to’ of innovating our streets to make them safer and more liveable, delivering better value to communities.

Innovating is about undertaking temporary physical changes to streets; improvements that are in advance of a permanent fix; and activations with a primary aim to impact safety and deliver on community placemaking aspirations.