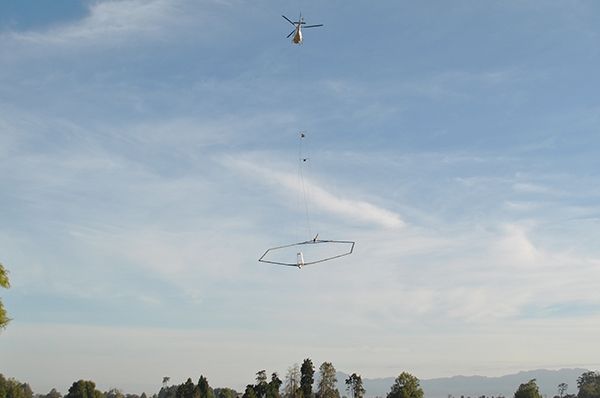 In February this year, the Critical Pathways Programme (CPP) team, including researchers from Lincoln Agritech and Aqualinc Research, introduced the world-leading SkyTEM system for airborne electromagnetic surveys to New Zealand.

The electromagnetic surveys captured at high spatial resolution characteristics of the subsurface environment so that researchers can study the flow of water, and contaminants transported by it, from a parcel of land to a surface water body.

Specifically targeting the relatively shallow and short transfer pathways operating at the sub-catchment scale (tens of km2) will allow researchers to create models capable of describing water flow and contaminant transfer at this important scale.

The lack of knowledge on these local pathways has been a well-recognised knowledge gap, prompting the MBIE-funded Critical Pathways Programme, which got under way in October 2018 with researchers from Lincoln Agritech and collaborators from Aqualinc Research, Manaaki Whenua Landcare Research, GNS Science, Lincoln University, AgFirst, and the Technische Universität Dresden.

SkyTEM electromagnetic surveys have been carried out elsewhere in the world to map water resources for consumptive use (drinking water, irrigation, etc.), but using them to elucidate shallow and short transfer pathways is a recent development. Collaboration with the developers of the SkyTEM system at Aarhus University (Denmark) enabled the CPP team to to optimise the survey set-up specifically for their focus on the shallow subsurface environment. Two contrasting Waikato catchments, the Waiotapu Stream catchment (approx. 300 km2) and the Piako River headwater catchment (approx. 100 km2) were surveyed, which took only seven flight days to complete.

Principal Environmental Scientist Dr Roland Stenger from Lincoln Agritech said the helicopter used parallel flight paths (200 m apart), which enabled the team to get high-resolution data across the entire catchment areas. “This starkly contrasts with the conventional approach that uses a limited number of point-scale lithology data from the installation of groundwater bores.”

The ‘big data’ generated by the flights is currently being analysed by the team in close collaboration with their Danish collaborators. The derived hydrogeophysical units will subsequently be used by Lincoln Agritech Hydrogeologist Scott Wilson for the realistic modelling of sub-catchment scale and catchment scale water flows and contaminant transfers.

A brief video clip explaining the purpose of the airborne surveys was produced and shown at community events as well as being made available through You Tube: