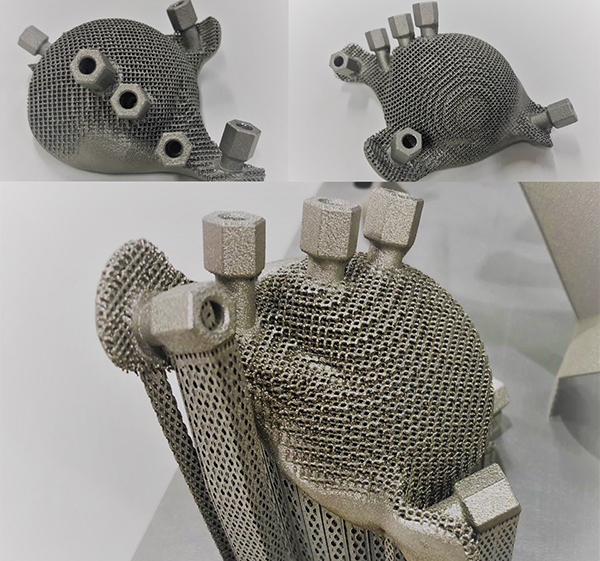 A titanium hip replacement, printed by RAM3D. RAM3D has been ramping up its metal 3D printing to meet customer demand - installing a new tool-grade steel printer to its existing tech suite. Photo: RAM3D.

BRANZ has noted that research and quantification of the energy flexibility offered by commercial buildings is limited. It is possible that energy-flexible commercial buildings are an opportunity to achieve reductions in electricity demand. Energy flexibility means the ability for a building to manage its demand and generation according to user needs, grid needs, and local climate conditions.

The research used case studies of New Zealand commercial buildings represented as building energy models (BEMs) that were simulated under energy-flexible operation in building performance simulation software. The selected case studies were small commercial buildings less than 1,499 m2 that had heat pumps. The building types were office, retail, and mixed-use. These buildings were selected due to their significant and sharp morning peaks in electricity demand.

Carbon dioxide emissions from aircraft are projected to triple between now and mid-century, even if substantial technology and operational improvements are implemented to make flying more energy efficient. Absent policy constraints, this explosive growth rate will use up a significant proportion of the Earth’s CO2 emissions budget. Research from Motu’s Niven Winchester suggests a solution: a carbon pricing system for international aviation that incentivises airlines to implement all CO2 abatement options that cost less per tonne of CO2 emissions abated than the social cost of carbon. This would result in a “socially efficient” level of emissions abatement at which net social benefits are maximized - delivering a “win-win” for the aviation industry and the planet.

TiDA's (Titanium Industry Development Association) spin-off company RAM3D Rapid Advanced Manufacturing has been working in collaboration with Oceania Defence since 2012 to 3D print the most advanced firearms suppressor in the world. Since January 2019, they've been ramping up production to print this suppressor project. The first shipment of suppressors was delivered in July and the remaining will be delivered by end of September 2019. Chief Executive Warwick Downing says the project has been keeping the Inconel machine at RAM3D very busy.

There has been widespread recent concern that strong increases in immigration flows have caused a housing crisis in New Zealand. MBIE-funded research by Motu on the Auckland housing market shows surprise results. “We know that between 1986 and 2013, the number of foreign-born New Zealand residents more than doubled, whereas the New Zealand-born population rose by only 8 percent. Over the same period, the average real (inflation adjusted) house price increased by about 140 percent,” said Dr Trinh Le, a Research Fellow at Motu Economic and Public Policy Research.

“What we didn’t know was the impact that different migrants were having on the housing market.”

The research found that a 10 percent increase in local area population is associated with 4–6.5 percent higher house prices. After controlling for socio-demographic differences, the researchers found that moving New Zealanders put more pressure on house prices than the same number of immigrants would.

Len Ibbotson will be joining the BRI as Viticultural Extension and Research Manager. Len studied Viticulture and Oenology at Lincoln University before working for several years in the wine industry in Central Otago. Since 2016, Len has been managing the viticulture programme for Matua’s company-owned vineyards in Marlborough. The focus of Len’s new role at BRI will be to lead research communication to members, to ensure information and tools delivered by research programmes are being adopted and applied.

HERA welcomes Senior Welding Engineer Volkan Yakut. Volkan brings over 15 years’ global experience to the table as a Mechanical Engineer and International Welding Engineer. He has worked as a lecture at universities as well as holding various management positions in quality and production departments. He has also been involved in a number of large scale projects such as the construction of power and cement plants and shipyard and ship building in Russia, Saudi Arabia, and Turkey.

Throughout his career, Volkan’s primary focus has been in the field of welding technologies and non-destructive testing. Specialising in Ultrasonic Testing, as well as Radiographic Testing, Magnetic Particle Testing, Penetration Testing, and Visual Testing.

Dr Hossain says his family background with farming was part of his motivation for joining PlantTech. “We know that by 2050, our population will be around 10 billion and the demand for food is expected to increase by as much as 70% over the next 30 years. At the same time, productive land is reducing in size and the number of people willing to work in the fields is decreasing. I believe that AI will be needed to address these food production and human resource challenges that we’re all facing.”

PlantTech also welcomes research scientist Hao Gao to PlantTech’s growing team of researchers tasked with supporting shareholders harness the power of artificial intelligence and machine learning to grow their plant-based businesses. Hao Gao skills working with complex algorithms and large volumes of data with companies in China and New Zealand are now being applied in a horticultural context.

Cawthron Institute’s Analytical Science Business Development Manager Augusta van Wijk was honoured by her peers at the New Zealand Institute of Food Science and Technology (NZIFST) annual conference with the Ron Hooker Award for Exemplary Services, an award which recognises significant past or current service or contribution to the NZIFST.

Congratulations to Bizhu Li who won first prize in the Three-Minute Pitch Competition at the New Zealand Institute of Food Science and Technology (NZIFST) Conference 2019 in Christchurch. This is the first time the NZIFST has held this competition for student members who were given three minutes to present using only one PowerPoint slide, plus two minutes of questions. The Riddet Institute sponsored the competition. Bizhu is a PhD student working in LASRA’s research laboratory on one of LASRA’s MBIE-funded projects.

The Cawthron Institute, along with industry partners Sanford and SPATnz, were finalists in the 2019 KiwiNet Research Commercialisation Awards PWC Commercial Impact Category, for their research into transforming mussel aquaculture through hatchery technology and selective breeding.

The Medical Research Institute of New Zealand - MRINZ has been back at Newtown School this past school term to get involved with "Curiosity Mondays". In this community outreach programme a group of young investigators has learned about how we can use our curiosity to answer really important questions about the world around us. The students all got to have a go at running their own experiments, and finished up by telling the MRINZ team about what they would want to investigate if they could research anything at all - We look forward to seeing how their curiosity shapes the future of our world.

Throughout the year, MRINZ has been visiting local primary schools around Wellington and teaching about topics they are passionate about. These have included how research works, why science communication is important, how to grow a healthy brain, and one of MRINZ’s doctors even helped young students keep their kitchen projects "food-safe" by teaching them about viruses and bacteria.

For the first time this year, in acknowledgement of strong community interest in the annual lecture, there were additional ‘fringe’ events on the days either side of the main lecture event. These events were for secondary school students, staff from local authorities, and Cawthron Institute staff.

BRANZ Building assemblies in a fire

A planned BRANZ course will let the building industry get stuck in to fire testing – examining how building assemblies will perform in a fire. Participants will be able to visit the BRANZ fire lab and see how building products perform under fire conditions and can suggest what they would like to see exposed to fire conditions. Demonstrations will cover both fire resistance and reaction-to-fire aspects. As part of the project, BRANZ is running a survey to get feedback from potential course participants.

New Zealand has a thriving medical research field advancing healthcare globally year after year. MRINZ research tackles some of the biggest health challenges facing kiwis today such as asthma, stroke, and intensive care. A team from MRINZ went to Auckland to share their experience at the NZ Association of Clinical Research (NZACRes) conference and learn from the other leading kiwi researchers. The Keynote Address, The Second New Zealand Asthma Mortality Epidemic, was given by MRINZ Director Professor Richard Beasley; Dr Ciléin Kearns, MRINZ’s Medical Illustrator and Research Fellow, presented on The Role of Medical Illustration in Research Recruitment and Dissemination and also a workshop on Harnessing Social Media for Medical Research; MRINZ’s Clinical Trials Manager Tanya Baker presented on Introducing the Medical Research Institute of New Zealand; and Clinical Data Manager John Martindale presented on Regulatory Aspects of Electronic Records.

The New Zealand Institute for Minerals to Materials Research (NZIMMR) welcomed Government officials from the Ministry of Business, Innovation and Employment (MBIE), New Zealand Petroleum and Minerals, and the Provincial Growth Fund (PGF) to Ngati Waewae Marae in early May. The delegates visited NZIMMR's corporate head office in Mackay Street, Greymouth for presentations followed by a site visit to the Spring Creek Research Laboratory. The presentations covered a research update on all the new Regional Research Institute’s active projects and some practical demonstrations of fine and ultra fine gold recovery.

By invitation from the New Zealand Government, NZIMMR CEO Tony Hogg attended the 2019 Prospectors and Developers Association of Canada or PDAC. PDAC is the world’s premier mineral exploration and mining convention that brings together experts, scholars, companies and organizations interested in mineral exploration. PDAC welcomed over 1,000 exhibitors, 3,500 investors and 25,600 attendees from 135 countries, attending technical sessions, short courses and networking events.

Dr Duncan Steel, Xerra’s Chief Systems Architect, featured at the Hugo Group CEO Retreat. Discussing “The geopolitics of the sky” he addressed head-on the beneficial, as well as dangerous, uses for satellite imagery and remote sensing data in the global battle for influence.

The Xerra booth at the ESRI User Conference raised awareness of what Xerra does. They presented at the Primary Industries workshop and answered questions about how Earth observation data and machine learning offer new solutions for environmental and water quality monitoring, forest and agriculture management, and urban change detection.

The Hon. David Parker, Minister for the Environment, toured the Malaghan Institute on 7 August. The tour was an opportunity to show the Minister Malaghan’s cutting-edge research and technologies and to discuss the future of gene therapies and potential implications for New Zealand’s biosecurity laws.