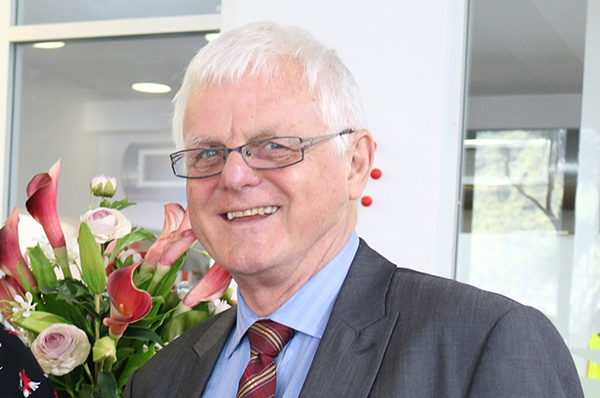 IRANZ Executive Officer Dr Rob Whitney has been made a Companion of the Royal Society of New Zealand Te Apārangi (CRSNZ) in recognition of Rob’s exceptional contribution to the promoting and advancing of science in New Zealand in a career spanning decades.

“Rob has made an outstanding contribution to the advancement of Independent Research Organisations in New Zealand, over many years and in a variety of roles,” says Dr John Bright, IRANZ Chair and Director of Research and Development at Aqualinc Research.

In parallel to his mainstream work, Rob has been an active member of the New Zealand World Energy Council (WEC) Committee for 20 years. NZ WEC became the Energy Federation (EFNZ) in 1997. He chaired the EFNZ from 2001 to 2015 and oversaw its progression to become the BusinessNZ Energy Council (BEC) in 2013. In 2015, he was appointed Emeritus Chair and a Life Member of BEC.

Rob was New Zealand's delegate at every WEC Executive Assembly between 1998 and 2013. He was appointed to the WEC Communications Standing Committee from 2007 to 2013.

He was involved in all WEC energy scenarios projects between 2001 and 2016 and Executive Chair for The World Energy Scenarios: Composing energy futures to 2050 study by over 60 experts from 30 countries, launched at the World Energy Congress in Daegu, Korea in 2013. These energy scenarios have been widely used by international and national organisations, businesses, and researchers.

Rob's career in independent research organisations started as an intern at the British Iron and Steel Research Association in 1964. After completing his degree (Wales), PhD (Essex), and a Royal Society European Post-Doctoral Research Fellowship at Freiburg West Germany, he joined BRANZ in 1972, becoming Assistant Director in 1982. He became Chief Executive of CRANZ (now CRL Energy) in 1988, retiring in 2015. He was the New Zealand Institute of Chemistry President in 1997. He is now Executive Officer for the Independent Research Association of New Zealand (IRANZ).

Rob has also been involved in many voluntary roles with independent research organisations for over 30 years, chairing the Independent Research Association’s group for 15 years, then Executive Member and Executive Officer of IRANZ. He represented independent research organisations on many working groups, from Simon Upton’s Ministerial Advisory Group to the current NZRIS and Research Charter of New Zealand Aotearoa.

The award of Companion of the Royal Society of New Zealand Te Apārangi (CRSNZ) was introduced in 1999 and there are now 54 Companions.

“I am in great and select company at the Royal Society, so I am very honoured,” says Rob, “I am also especially pleased that it recognises my contribution to applied science and technology throughout my career with independent research organisations.”

As well as Rob, the Royal Society elected four other new companions this year - see their website for details.