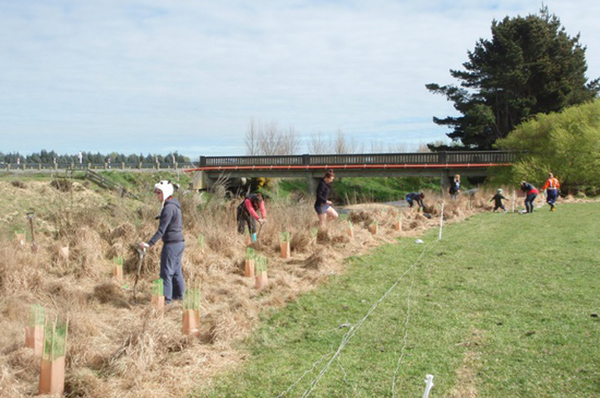 Riparian planting along the Waihopai River.

Environment Southland’s Waihopai River took out the Supreme Award for Most Improved River at the New Zealand River Awards 2019.

Two decades ago, Invercargill had turned its back on the Waihopai River and referred to it as ‘the drain’. Its flat catchment had been drained to make way for intensive farmland and in the lower reaches the river was barricaded in to protect the city from flooding. The accumulated effects of steep and eroding drainage banks, nutrient losses from farming, stormwater discharges contaminated with sewage and other industrial contaminants led to a river in a poor state.

But, between 2006 and 2015 a Living Streams project led by Environment Southland worked with farmers to identify issues, prepare farm environment plans, and direct funding to specific initiatives. In addition, the upgrade of urban and industrial wastewater systems have had a marked positive impact on the health of the Waihopai River.

As a result, E. coli levels have been dropping 6.1% per annum and its Macroinvertebrate Community Index (MCI) has risen 1.9% per annum over the past decade.

Although Waihopai is this year’s supreme winner, the river is by no means pristine. River health is getting better, but considerable improvement is still needed to make the river swimmable again.

For more information about the Waihopai and other River Award winners, see New Zealand’s most improved river announced amongst winners at River Awards.

Cawthron’s future developments include its upcoming National Algae Research Centre which will enable Cawthron to expand its internationally-recognised work in the rapidly growing algae sector and create value for existing and future partners. Cawthron has more than 30 years of expertise in algae research, from microscopic level through to the impact of algae in our marine ecosystems, and is one of only a few organisations worldwide to specialise in extracting high-value bioactive compounds from algae. Construction of the Centre is scheduled to begin by October 2020.